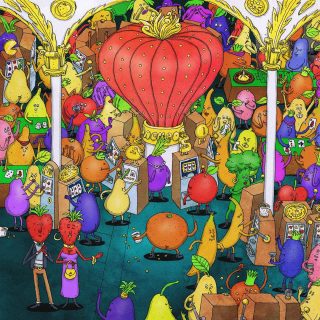 Jackpot Juicer is the upcoming tenth full-length studio album by American rock band Dance Gavin Dance, scheduled to be released on July 29, 2022 on Rise Records. It will serve as a follow-up to their ninth studio album, Afterburner (2020). Produced by Kris Crummett, the album was recorded at Interlace Audio in Portland, Oregon between April and July 2021 and is the band’s longest album to date consisting of eighteen tracks and a runtime of one hour and three minutes. It is the band’s first studio album to be credited as a sextet since Acceptance Speech (2013) as well as their first to accredit Andrew Wells as an official member since joining as a touring guitarist in 2015. It is also their final release to feature bassist Tim Feerick, who died on April 13, 2022.

Jackpot Juicer will be a follow-up to their ninth studio album, Afterburner (2020). They released their first single, “Synergy”, featuring Rob Damiani of Don Broco. “Pop Off!” was released as the second single on May 4.

Following the death of their long-time bassist, Tim Feerick, they have decided to continue on there big tour in honor of him and his family.